The Book of Basketball: Holy Scriptures of the NBA 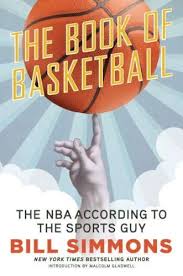 Very rarely is a subject so thoroughly and entertainingly encapsulated in a single text as Bill Simmons’ The Book of Basketball: The NBA according to the Sports Guy.  It is, until another writer is crazy or talented enough to attempt to do better, the definitive bible of professional basketball.  His insightful analysis, attention to basketball minutia and the absolute thoroughness of his examination make you wonder if God didn’t appear to the author as a burning bush and dictate the text.  It’s hardly high literature but it’s superbly written and offers enough –often hilarious- references to pop culture that it’s entertaining for even the most limited of basketball fans.

Simmons offers a unique and vibrant dissection of the evolution of the game over the past five decades, a thorough and well-reasoned ranking of the top 96 players ever to play the game, a chapter on the greatest teams of all time, and -in a chapter that is sure to appeal to the NBA-obsessed- he also tackles dozens of fascinating alternative histories like: “What if Len Bias hadn't overdosed?” and “What if the 1984 draft had gone differently?”  Very few stones are left unturned in this exhaustive examination.

But what elevates The Book of Basketball from just another entertaining sports book to the pantheon of important books is that it breaks new ground by straddling genres.  When originally published in 2009 it was one of the first books that successfully navigated the intersecting terrain between sports and pop culture.  While it contains sufficient stats and jargon to sate basketball purists’ appetites, it also contains enough of the other stuff to appeal to a very broad audience.  It reads something like a well-informed blog; what one might imagine the result of cramming Sports Illustrated, The Onion and People magazine into a blender and pureeing.  And while that may not be an appealing dish for everyone, that seems to be the present state of the publishing industry.

The Book of Basketball is also an incredibly fun reading experience as the author’s passion and child-like exuberance for the subject is highly infectious and jumps off of nearly every page.  Simmons, aka The Sports Guy, and the brains behind the popular mixed media website Grantland (The Literate Man highly recommends this site, which delves into a little bit of everything, including literature), is not only addicted to the NBA but is also a reverent student and able chronicler of the game.  He’s also compiled what might be the most engrossing and ample set of footnotes we've ever seen.

So if you hold even a passing interest in the game of basketball do not hesitate to pick up this book.  Before you know it, you’ll be on page 300 -crunching stats and reading about Rick Barry’s hair piece and Larry Bird’s locker room beer consumption- unkempt, unshaven, and pathetic; partaking in NBA lore to levels of near depravity, wishing you’d never picked this book up.  And loving every minute of it.
Posted by aaron at 7:49 AM