I love this novel. I love it not for what it is, but for what it represents. And what it represents is a continuation of the quintessential American storytelling tradition wherein family is intimately and irrevocably linked to the land that provides for its survival and it is the emotional drama of multiple generations of hardworking and hard-loving men and women that drives the story straight to the reader’s heart. It is the tradition first made popular by Mark Twain in The Adventures of Tom Sawyer and Adventures of Huckleberry Finn, then polished by John Steinbeck in The Grapes of Wrath and East of Eden, and finally perfected by Norman Maclean in A River Runs Through It and Ken Kesey in Sometimes a Great Notion. It is, quite simply, the tradition to which The Literate Man is dedicated. And it is a tradition that is largely absent from the pages of Amazon and the bookshelves of Barnes & Noble, which are increasingly dedicated to the formulaic and the prurient.
The Long River Home follows four generations of the McCall family from 1861 through 1949 as they witness and experience the transformation of the Ohio River Valley from wilderness to agriculture to industrialization. Andrew McCall, solitary child of the Civil War and sometime bootlegger, is the patriarch of the family, and the wildness and wanderlust of his nature can be traced down the succeeding generations. Equally prominent in the family’s blood is the loyalty and stoicism brought by Andrew’s wife, Mariah, who manages to hold the family together even when events threaten to tear it apart. There is no unbelievable drama here—only the decisions, right and wrong, of the very human beings that inhabit the novel’s pages. But Smith treats them both fairly and subtly, and the reader comes away with the sense of having lived among the McCalls and having loved them in spite of, or perhaps because of, all of their flaws.
The Long River Home is not perfect. It is inconsistent at times, and the reader feels strangely closer to the historical characters than those that would be almost contemporaries. It is not in the same class as those classics mentioned above, though at times it does get within spitting distance of them. But it is a book that brings you into emotional contact with the characters that inhabit its pages and closer to an understanding of the human condition. And for that reason alone, it should be treasured.
Posted by Patrick (at The Literate Man) at 10:59 AM No comments: 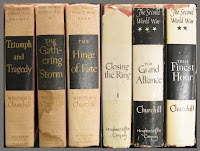 Now this is a man’s work, and for more reasons than one. In six long and annotated volumes, Prime Minister Winston S. Churchill holds the reader’s attention masterfully through the years of blind pacificism and the rise of the Nazi menace in Germany (The Gathering Storm) through the blitzkrieg campaigns that brought all of Europe, and very nearly England, to its knees (Their Finest Hour) to the reluctant entrance of both Soviet Russia and the United States into the war (The Grand Alliance) and the gradual turning of the tide as the massive capabilities of all three were harnessed to overcome German war production (The Hinge of Fate) to the storming of the European continent and the discovery of German concentration camps (Triumph and Tragedy) to final victory over Nazi Germany by traditional warfare and imperial Japan by the reluctant use of atomic weapons (Closing the Ring).
Please understand, I am not generally a fan of military history or of war tales in general. And I am certainly not a fan of all of Churchill’s works (his four-volume work, A History of the English Speaking Peoples, has me begging for release only halfway through volume two). But this is quite simply the greatest story of the twentieth century, and this set of six volumes records the events through the eyes and ears and hands of one of its primary architects. Churchill is a fantastic storyteller here, though he does have a weakness for prolonged and verbose defense of his decisions in the moment. Nevertheless, the urgency of actual events moves the story along at a comfortable pace, and Churchill generously excerpts from his own correspondence and the archives of the British government’s to tell the tale.

Especially interesting is the tremendous correspondence that passed and the friendship that developed between Churchill and Franklin Roosevelt before America’s entrance into World War II. Even as the population of Great Britain was huddled underground in subway stations during the Battle of Britain, Churchill had faith that reason and right would win out in the hearts of the American people and he repeatedly expressed that faith to Roosevelt, while also pleading for increased military support under the Lend-Lease Act of 1941. Equally engaging is Churchill’s hot and cold relationship with Joseph Stalin, whom Churchill variously considered his closest ally and, by the end of the war, the embodiment of evil upon the earth. But the facts don’t lie, even in Churchill’s hands, and there can be no doubt that England and America would have very likely lost the war to the Axis powers if the Great Bear had not made its timely entrance and proceeded to sacrifice the greater share of its manhood for victory.

The Second World War is not for the feint-hearted. The reading of it is an enormous project to undertake. But the rewards are tangible not only in the beautiful prose which graces its pages, but also in the significance of the events that it relates. Overall, it is simply one of my favorite works.
Posted by Patrick (at The Literate Man) at 5:44 PM 2 comments: