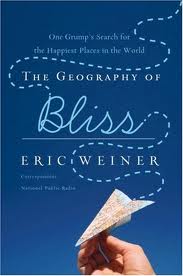 With summer practically over, and many of us lamenting the vacation that we didn’t take, Eric Weiner offers the next best thing: a bookation!  That’s a made-up word, of course, but it refers be any book that so thoroughly transports the reader it’s like going on a trip without ever leaving the comforts of your reading space.  And The Geography of Bliss: One grump’s search for happiness is one of the most enjoyable bookations we’ve been on in awhile.
There are million of books in the world that profess how to be happy, but Weiner gives us something we can really use by showing us where to be happy.  Admittedly, the study and search of happiness is a little like a hunting Sasquatch or unicorns, but more and more people with really big brains, and even governments, are dedicating an increasing amount of time and resources to this emerging field.  And (spoiler alert!), while anyone looking for an “x marks the spot” guide to happiness will probably not find it, what you will find is a clever, entertaining and thought-provoking examination of people and cultures around the world and a pretty respectable attempt at isolating the keys to happiness.
Wiener, a long-time foreign correspondent for NPR and reporter for The New York Times, sets out to find the happiest place on the planet and unearth the essential components to this harmony.  He does this by not only searching out the so-called happiest places, according to various polls and studies, but by also venturing to the least happy places –according to these same measures- on earth as well.  He travels to nearly a dozen countries (, the , , , , , , , and the ) to see what happiness is all about.
Over the 325 pages we learn that happiness is many things to many people.  For example, binge drinking and vocational failure apparently translate to happiness in .  That ’s government actually measures the mountain kingdom’s contentment through its Gross National Happiness index, in place of GDP.  That Moldovans love misery.  That the Swiss are uptight, and yet, very happy.  That the Thai people have a scientific method for spotting fake smiles.  But perhaps most revealing is the counterintuitive concept that the more a person focuses on being happy the less happy they’ll likely be.
A self-admitted “grump” Wiener fortunately doesn’t let any of his personal discontent spill over into the narrative and the writing is crisp, lively and full of insight.  And it’s often pretty funny.  Equal parts philosophy guide, travelogue and social commentary, it never drags and there’s always something new to discover on the next page.  The book touches on many scientific studies and academic interviews, but it’s hardly a scientific or academic work.  Wiener includes just enough of the starch to prop up his colorful narrative and give it a point of reference.
Aside from creating a hugely readable and revealing book, Wiener manages to successfully take the reader on a trip around the world from the comfort of an arm chair.  His disarming writing style and investigative journalist skills puts the reader right in the middle of a temple in Bhutan, or the back of van in Moldova, or a coffee shop in Amsterdam, or a grimy strip club in Bangkok.  And while we may never know exactly where the happiest place on earth is (“happiness is a moving target”), Weiner’s given us a pretty good idea of where to start looking.  TLM highly recommends The Geography of Bliss.
Posted by aaron at 10:48 AM 6 comments: