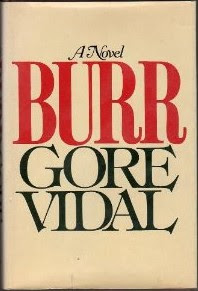 Gore Vidal is the godfather of historical fiction. While he may not have invented the genre, he’s the man that has done more to elevate its status than any other writer and added more quality content to the canon than arguably anyone else.

Everyone seems to have their favorite Vidal novel and here at The Literate Man (TLM) we’re Burr diehards. And how could you not be intrigued by Aaron Burr’s story or at least Vidal’s interpretation and telling of it?


General in the Revolutionary Army, would-be conqueror of Quebec, president of the United States of America and Emperor of Mexico? If things would have turned out just a little bit differently this is the résumé Aaron Burr could have had. Instead, his epitaph reads: US senator, US Vice-president, treasonous exile, alleged practitioner of incest and a mostly forgotten founding father. Doesn’t have quite the same ring to it.
But that’s the magic of Vidal’s vision. In the writing of Burr he’s taken an historic footnote –Burr- and turned him into a man that was a whisker away from becoming quite possibly the most important figure of the 19th century. If only things could have worked out differently.

Most people today simply know Burr as the man who shot and killed Alexander Hamilton in an 1804 duel. Which is true. But commonly accepted history has made Hamilton a martyr and Burr little more than a strange curiosity. In Burr, Vidal has given the man an historical defense.

Vidal has taken certain liberties in writing this account, including the creation of the refreshing young narrator, Charles Schuyler, a clerk in Burr’s office, who is approached by political enemies of future president Martin Van Buren to prove he’s the bastard son of Burr. That’s a strange sentence, but an interesting one. And the book is full just those sort of shocking and interesting revelations.
The author was meticulous in his researching of the material and even some of the themes that seem to employ a great deal of creative license (such as his assertion that Hamilton alleged incest between Burr and his daughter, thus triggering the fatal duel) are based in fact. But more than just an impressive compilation of facts, Vidal has told this story in a compelling and humanistic tone that most revisionist historical accounts fail to achieve.

And what a treasure trove to draw from. Burr seems to be personally involved in all the most important historical events of his lifetime. Vidal takes us from his days as a colonel in the Revolutionary War, the founding of what would become JP Morgan Chase, his electoral tie with Thomas Jefferson in the 1800 presidential contest, allegations that he and Andrew Jackson hatched a scheme to conquer Mexico and appoint himself emperor, and ultimately the killing of his former best friend, Hamilton, in a gun fight in New Jersey.

You simply couldn’t make this stuff up. And whether or not Vidal’s interpretations would hold up under absolute historical scrutiny, we’ll probably never know. But if you’re looking for an enthralling read Burr hits the mark by any measure of examination.
Posted by aaron at 10:27 AM 4 comments: