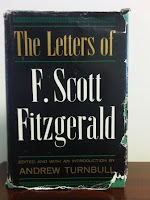 There is perhaps nothing more satisfying for a reader than the discovery of a dusty, hardbound copy of some forgotten tome in the dirty recesses of a flea market or attic. When the reading of that tome leaves an impression, the experience is that much greater.
We came upon The Letters of F. Scott Fitzgerald in the corner of an indigenous artisan’s market in Antigua, Guatemala. More than a bit weathered and musty, it carries the scent (though not the stamp) of a public school library and the marks of having been thumbed by more than one thorough reader. As for the book itself, it is a very complete set of the letters between Fitzgerald and his intimates, including his daughter, Scottie; his wife, Zelda; his editor, Max Perkins; his friend, Ernest Hemingway; and his agent, Harold Ober, among several others. Edited by Fitzgerald’s friend, sometime ward, and fellow Princeton graduate, Andrew Turnbull, the collection provides an intimate look at a man of tremendous talent who, when not on the bottle, was a craftsman of the English language, a loving father, a devoted (if absent) husband, and a loyal friend.


Hemingway once quipped that Fitzgerald was hopelessly enamored of money and the moneyed classes, and to some extent the letters in these pages bear out that criticism, but it is his devotion to his craft, the fleeting nature of his fame, and his need for others’ respect of him as an artist come through most loudly here. And, as the years wear on, there is a particular pathos throughout of a man that feels his talent slipping from him and his reputation becoming a distant memory. Overall, The Letters of F. Scott Fitzgerald paints a very close and realistic portrait of a man that has become a part of American folklore.
Posted by Patrick (at The Literate Man) at 2:27 PM 2 comments: