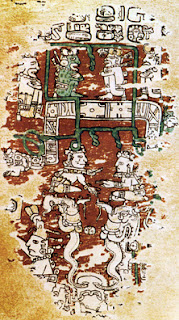 The Paris Codex is kept in a sealed box at the Bibliotheque Nationale in Paris, and is not generally accessible to the public.  I was able to handle it only after a lengthy formal request process during which I explained repeatedly that I was working on a book in which the Paris Codex figured prominently.  By sheer persistence, I wore them down.  And I was even able to sneak my wife in as well as my "translator" on the day of our viewing.
To hold a five hundred year-old book from a "lost" civilization that is written in a language that no longer exists is absolutely indescribable.  I remember carefully paging through the codex from beginning to end over the course of several hours, its pages still bright and beautiful, though delicate and fading in spots.  And I couldn't help but think of the author, seated cross-legged, paintbrush in hand, half a century behind me, and born of a civilization that owed nothing to my own.  I might as well have been reading the marks of an alien world light years away.  But one thing I knew that I shared with him was an appreciation of the written word and a love of the books that contain it.  In many ways, I think it is the written language that allows us to finally transcend time and place and to sympathize with those around us--and isn't that the very thing that makes us human?
I've gone on far too long--I get wrapped up in books, what can I say?  But what about the rest of you?  Do you consider any books sacred?  Do you remember a particular experience with a particular book above all others?  And what do you think it is about the written word that transfixes and binds us?
Posted by Patrick (at The Literate Man) at 2:02 PM 5 comments: 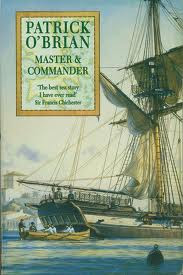 If you are up for the challenge, I invite your participation--please let me know that you're in by posting below. I am also soliciting ideas for some sort of prize or at least acknowledgment of accomplishment for those who see the series through. Please do share your thoughts.
Posted by Patrick (at The Literate Man) at 3:41 PM 13 comments: