The House of Tomorrow: Punk Rock and Geodesic Domes

Sid Vicious, geodesic domes, and Buckminster Fuller…these are not themes you typically build a sentence around, let alone an entire work of fiction.  However, that’s exactly what Peter Bognanni has done.  And we’re glad he has because he’s not only created an immensely readable novel but he’s managed to put a fresh spin on the coming of age genre, which let’s face it, after several millennia of story-telling, is not easy to do.
The House of Tomorrow is, at times, both irreverent and poignant, charming and devastating, and this contrasting balance stemming from its odd couple protagonists makes this an engrossing book from the first page to the last.  At first glance the pairing of two very different teenage boys seems improbable at best and gimmicky at worst.  But it works.   And after several chapters into the book it seems not only plausible but natural that these students of such divergent gurus (Johnny Rotten and Buckminster Fuller) would join together.
Sebastian Pendergrast is a 16-year old shut-in orphan raised by a Fuller-obsessed grandmother in a geodesic dome on a hill.  Jared Whitcomb is a sickly and chain-smoking punk rock wannabe with a new heart in his chest and arguably the most bitter 16-year old on the planet.  When Sebastian’s grandmother is incapacitated by a stroke he’s left to his own devices and, for the first time in his life, has access to life outside the dome.  It doesn’t take long before the siren song of teenage temptations (think punk rock, cigarettes and girls) beckons.  After a chance meeting through the kindness of Jared’s mother, these two loners strike up an unlikely friendship and the baddest punk duo North Branch, Iowa as ever seen.
Sebastian plays the straight man to Jared’s ball of fury and neither has been dealt a very good hand in life.  But they make each other better and their respective lives richer and that’s what makes these characters so compelling.  Neither one emerges as a wholly-formed young adult, but for the brief sliver of time we’re allowed in their lives, they lead the reader on a journey of unexpected and satisfying discovery.
Bognanni‘s prose drips with angst, but a good angst, and he never allows it to suffocate the story.  He keeps the tone on target with inventive teenage dialogue that generally hits the mark.  And that’s one of the surprising things about this book:  his ability to mimic the mostly mindless chatter of teen boys in a way that’s not only engaging, but revealing.   Using Fuller’s creative philosophy as a strangely effective prop, he maintains a narrative that is unexpectedly moving and creates a surprising tenderness amidst the barren void of young male adolescence.
The House of Tomorrow won the LA Times award for new fiction in 2010 and critical acclaim from various media outlets.  According to his website, Bognanni is hard at work on his next novel.
Posted by aaron at 9:25 AM 6 comments: 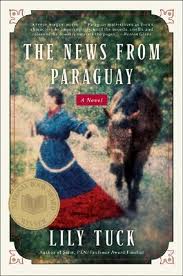 In the past 15 months, 18 days, seven hours and nine minutes, The Literate Man has featured exactly one review of a book authored by a woman.  The reason: we are chauvinist pigs.  But in a meager attempt to right our wrongs we offer up high praise for The News From Paraguay, a delightful book from the very talented author, Lily Tuck (and we’re pleased to note that the National Book Foundation shares our good taste, having named this novel the National Book of the Year in 2004).
The News From Paraguay is the classic love story of girl meets dictator, runs off to the South American frontier to be his mistress, raises a family, and helps run the country into the ground.  That old story.   And Tuck presents this real-life account -loosely based on actual people and events- in a refreshingly original voice, spread over an economic and stylish 245 pages.
Irish-born Ella Lynch is hardly won over by the rough-edged Franco Lopez at their initial meeting on the Paris party circuit in 1854.  A coarse man from with bad English, body hair, and a seven-piece Indian band that follows him like a shadow, Franco is hardly the definition of Parisian chic.  But when Ella’s Russian lover decamps and leaves her penniless and destitute, Franco’s silly boots and his seemingly endless supply of gold suddenly seem a lot more attractive.  Within months Ella’s pregnant and on Franco’s personal yacht sailing for his magical South American kingdom.  Shrouded in mystery and full of surprises, might as well be a far-off planet, as Ella musters all her strength and courage, in anticipation of her new life.
What follows next is a sad and enlightening story of excess, outsized ambition and the self-destruction of a man and a country.  While Franco is a larger-than life character with enormous and lusty appetites, this is mostly Ella’s story to tell as both an outsider (to ) and an insider (an intimate advisor to the Franco).  It would be easy to fall into a sentimental or predictable tone of lament and loss but Tuck is confident in her writing and presents a powerful and flawed female protagonist that embraces her role in the ill-fated drama.  The author’s consistent narrative remains true to her characters and ultimately reads something like Nero’s diary as () burns around them.
Tuck is an inventive and disarming writer and she pens a fascinating account of ’s obscure history using an imperfect love story as her vehicle.  She achieves complexity of narrative not through any single, multi-faceted character but rather through an ensemble of marginal people that provides an impressively broad scope of perspective using relatively simple characters.  And that’s the book’s charm, deftly mixing the viewpoint of the indigenous, ex-pats, mestizos, elites and the victims of one man’s narcissistic ambitions into a recipe of sheer literary pleasure.  Tuck threads these conflicting perspectives together like a handmade quilt and the book reads like a collection of singular, but related paragraphs, each featuring a different and unique narrator.
This is hardly a definitive history of , but that’s not really the point, as Tuck includes just the right balance of true events and research to lend the storyline credibility without bogging down the human elements of the book.  The News From Paraguay is first and foremost the tale of a strong-willed and sometimes delusional woman in love; but the early struggles of the Paraguayan republic and it’s insanely determined dictator provide a fascinating backdrop for Ella’s story.   Anyone that picks up this creative and engrossing work will be glad they did.
Posted by aaron at 10:00 AM 6 comments: