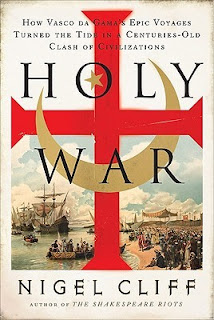 History is riddled with injustices: taxation without representation, the OJ trial, Super Bowls XXX and XLIII and Vasco de Gama second-fiddle status on the list of great European explorers.  Thanks to centuries of reimagining his exploits by popular culture and the Catholic Church, glory-whore Christopher Columbus is the best known and regarded explorer from this era.  But for anyone hoping to see de Gama placed above his seafaring rival on the pantheon of “discovery” Nigel Cliff provides plenty of ammunition for the cause in his terrific and engaging Holy War: How Vasco de Gama’s Epic Voyages Turned the Tide in a Centuries-Old Clash of Civilizations.

This is hardly the definitive work on de Gama's life nor is it anywhere near the first to poke holes in Columbus’ “achievements” (this book, in fact, devotes only a few chapters to Columbus ' doings despite a teasing reference to a “great rivalry” on the inside flap).  But what set's this work apart is the impeccable research and accessibility of the historical context surrounding this pivotal moment in history.  There's nothing really new here but Cliff's presentation and narrative are refreshing; he book flies-by as he wraps historical facts in personal details.  He deftly balances the historical nuts and bolts with human levity adding lightness to a subject matter that tends to be gruesome and greedy.

There’s very little known about de Gama’s personal life but Cliff enhances this information by detailing an abundance of little known personal info about the Iberian monarchy, their courts and other explorers.  This is where Holy War shines, thanks to a mountain of foot notes (arguably the most impressive we’ve ever seen) and the author’s vision.  Cliff’s version truly is a people’s history and his attention to these details makes this usually academic terrain, we dare-say, riveting –and we’ve never use that kind of word to describe historical non-fiction.

Where the book falls short is its promise to unearth any original Huntington-like “clash of civilizations” moment in this well-trod ground.  And as Cliff painstakingly points out, de Gama’s voyage was motivated by a search for heathen souls, treasure and revenge –themes that would actually seem to bind 15th century Iberia and the Islamic East.  Cliff also fails to connect the dots between the modern “war on terror” and 15th century clashes in any sort of meaningful way as the introduction seems to promise.

But don’t read this book for a re-defining of the civilization cornerstones and ethics that have carried us to the present; leave that to the tweeds in the ivory towers.  Read this book as a rich and colorful glimpse into the place and context of the Age of Exploration.  If you do you’ll be well rewarded.

With only two books under his belt (The Shakespeare Wars, Schuster & Simon, 2005; look for his forthcoming Last Crusade, Schuster & Simon, 2012), Cliff  has already placed himself among the most readable historians working today thanks to his historian’s eye for detail, his writing talent and rare foresight in arranging the details.  In the tradition of venerable contemporaries such as Howard Zinn or David McCollough, cliff tells the story from the ground up rather than the top down ensuring that the information is not only accurate but engaging.

This is a lively and fascinating re-telling of one of history's greatest naval expeditions and the powers behind it.  Historical non-fiction simply doesn’t get any better than this.
Posted by aaron at 8:41 AM 1 comment: