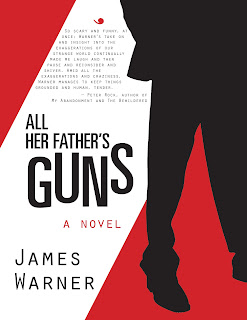 At The Literate Man we enjoy and take pride in shining the light on new authors and unheralded books, especially those from independent presses. James Warner recently released his first novel (All Her Father’s Guns, 2011, Numina Press) and he was kind enough to take a few moments and talk with us. Warner has produced a book that is clever, funny, at times enlightening and always entertaining. He’s also a man who knows his craft and offers us a deeper glimpse into his characters, writing technique and British campaign slogans.

All Her Father’s Guns is a contemporary portrait painted in American cultural extremes which Warner deftly deconstructs through tender moments and universal bits of humanity, ultimately convincing the reader that maybe we’re quite as crazy as we think we are. It’s a terrific debut novel rich in characters and a warm core underneath its “absurd” veneer. TLM urges you to checkout Warner and his novel at http://www.jameswarner.net/.


TLM: Thanks for taking the time to chat with us James. Just finished All Her Father’s Guns and we really enjoyed it. It’s such a unique book that we’ve got to ask: what planted the idea in your head to write this story?

James: I think before I knew anything else about All Her Father's Guns, I knew it was about a younger British guy –Reid -- and an older American guy – Cal... It's always hard to remember origins – probably the real beginnings of any creative project are subconscious. But looking back at the period when I started writing the book, that was around the time my father died and my daughter was born, events which occurred close together and obviously changed the meaning of fatherhood for me, just as having an American daughter must have altered my perspective on Americanness.

TLM: What is that makes the Bay Area, from Silicon Valley to “Berzerkley” and points in between, such an interesting place and such fertile ground for a book setting?

James: The Bay Area is a good place for a satirical political novel – Berkeley, where Reid lives, is famously liberal, and Silicon Valley, where Cal lives, leans more libertarian... and then one doesn't have to drive too far into the hinterland to find the rest of the political spectrum.

It fascinates me the way the flaws in an ideology, obvious when contemplated from the outside, become invisible once you're sucked into becoming a convert.

TLM: You’ve created such distinct and opposing characters in this book, from liberals and conservatives to feminists and male chauvinists, etc., which was the most difficult character to write and why?

James: Lyllyan – Cal's daughter who is also Reid's girlfriend – was maybe the hardest. There's a writing exercise where, for each character in a book you're writing, you have to say what they have in their pockets. This is a good exercise since it turns out that, if your characters have fully come alive, you know instantly what's in their pockets! Lyllyan was the character whose pockets it took me the longest to see into, but I'm pretty sure she has a nail file and a flyer for a band I'm not cool enough to like.

G.K. Chesterton – “Once I planned to write a book of poems entirely about things in my pockets. But I found it would be too long; and the age of the great epics is past.”

TLM: There are overtly political themes throughout the books. Did you set out to write a political book or simply a book with politics as the backdrop?

James: One of my hopes with Cal was to create a pro-gun, pro-life character who readers could empathize with even if they're unattracted by his policy positions. Guns and abortions aren't partisan issues in most countries, and I had a theory that the issues that are uniquely controversial in the U.S. must tell you something interesting about the U.S.

While Cal takes his ideas to an illogical extreme – although check out some gun culture websites before you accuse me of exaggerating! -- his politics are a natural outgrowth of his life story as he interprets it. And when you can see that about someone, it makes them more sympathetic. Many men adopt belief systems they subconsciously hope will compensate for their personalities.

TLM: Do you see any interesting story ideas hatching out of our current election season?

James: The struggle for the Republican nomination for 2012 has felt more than usually reminiscent of a reality TV show where contestants keep getting “voted off the island.” Both in electioneering and in reality TV, one's rewarded for being able to make up a sustainable story about oneself – which puts the people editing the footage in a powerful position.

For most of history, a leader's role was to live out a personal drama of honor and shame that symbolized his people. That's no longer what our leaders are officially supposed to do, but on some level we still expect it of them. To sell yourself, you need a narrative – when a job interviewer says “So tell me something about yourself,” they're saying “Make up a story that inspires me to invest time or money in you!” Reid will always be completely dumbstruck by this question - - a question which Cal can hit right out of the ballpark. But the stories we tell about ourselves become less true over time, until eventually we need new ones, which is Cal's big problem in All Her Father's Guns – when the story you tell about yourself stops being true, how do you handle that?

TLM: What writing influences did you have when creating All Her Father’s Guns?

James: My favorite writer when I was about twelve was P.G. Wodehouse, and when I was about sixteen, Evelyn Waugh. Waugh is probably the biggest influence you see in All Her Father's Guns, although the plot, it occurred to me after completing it, is Wodehousian: the story is driven by a series of escalating blackmail attempts within a family. I can't think of any other books with that plot that aren't by Wodehouse.

TLM: Several of the main characters including Reid, Viorela and Boris belong to the “Department of Theory.” What inspired you to create the colorful cast of characters and dialogue that inhabit that crazy world?

James: I guess the idea was to encapsulate the “crisis of the Humanities” in a single dysfunctional Department.

Business people prefer theories that simplify the world – popular business books reduce everything to a simple formula or list. Humanities professors are more into complicating things – in the conclusions of their papers, academics may even take credit for “problematizing” or “difficultizing” an issue. The clash between the business and academic ways of looking at the world is one of the inner conflicts I was trying to work through in the book.

TLM: As an outsider looking in on U.S. political culture what’s your take on all the madness?

James: You're implying I myself are somehow outside of the madness! Actually I've lived in the U.S. for about the same period of time that I lived in the UK. My daughter certainly thinks the British are the mad ones.

Americans are more likely than English people to see the glass as half-full – David Cameron's campaign slogan was “We Can't Go On Like This,” a thoroughly British utterance which sounds weirdly negative to the American ear. If Obama was British, he'd have had to run on a platform of Guarded Enthusiasm and Mild Tinkering – which come to think of it isn't a bad description of what he's been able to deliver so far.

TLM: We’re always curious, and it’s not always apparent, but how did you arrive at the title?

James: I went through a bunch of titles – a lot of them had “father” or “guns” in them. All Her Father's Guns has the right cadence, rhythm and tension to it, and kind of a sardonic Western resonance. I like titles to evoke mysterious unexplored realms...

TLM: Why would you recommend All Her Father’s Guns to the followers of The Literate Man?

James: Uh oh, so now you want a stump speech! Well, many readers have commented that this book is about people from different backgrounds trying to find common ground – an affirmation that, even when the ideologies we cling to are opposed, we still have a shot at sympathetically entering each other's worlds. But mostly for me it's about the jokes and the language and the story.


(About the author: James Warner is the author of the novel All Her Father's Guns. His short fiction has appeared in Narrative, Agni Online, Ninth Letter, and elsewhere. He writes an almost-monthly literary column for the political webzine openDemocracy, and organizes the San Francisco reading series InsideStorytime. His website is http://www.jameswarner.net/.) 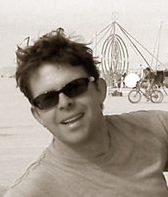