Ransom: A Man On A Japanese Mission 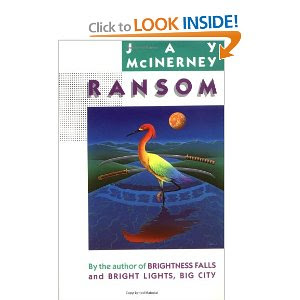 Just like the Dyanetics, Ransom is a book ahead of its time. Actually, this little referenced 1985 gem -the second novel from a young Jay McInerney released- is nothing like L. Ron Hubbard's opus. But it's nontheless a remarkable book as it set the stage for a new style of writing and is in many ways the forerunner for the flood of contemporary travel/expat/adventure books on store shelves today.

It’s a book of disillusionment and exile at the dawn of our most recent wave of globalization. And while some the specifics may have changed over the past three decades the overarching and universal themes of this work are more relevant today than ever.

Recent college graduate Christopher Ransom, or just plain “Ransom” as he’s known, is escaping the excesses of post Viet Nam War America and an overbearing father. But instead of hitching across America like Kerouac or wandering the streets in an introspective funk a la Catcher in the Rye, Ransom finds himself exiled in the ancient city of Kyoto Japan after a failed adventure through the Indian sub-continent.

His time is spent practicing karate, teaching business English, working on his motorcycle, drinking at a ridiculous expat Cowboy/Blues bar and fighting the demons from his Afghan experience. It’s a strange recipe to be sure but within the context of the time period and the budding era of backpacker exploration into ever more exotic locales it seems to make sense.

Ransom ultimately comes up short in his attempts to sort out his hang-ups and fails to make sense of the tragedy his suffered at the Khyber Pass. McInerney offers us a poignant, layered and at times quite humorous look into the process. And while he never quite sorts through all the emotional debris he does achieve an odd sort of redemption and his soul-searching is balanced brilliantly against the backdrop of his fish-out-of-water experience living among the Japanese.

The writing is smart, clear, economical and the storyline and pace or spot on. At times the solemnity and severity of his angst can seem a bit contrived. But those moments are counter-balanced by his wry observations of the Americana obsessed Japanese and the samurai wannabes he encounters at his ex-pat watering hole.

Some of the most memorable parts of this book are the simple day to day exchanges with the neighbors, students and dojo comrades. These seemingly mundane transactions reveal truth and humor as Ransom tries to make sense of the world and his place in it. Throughout this journey the reader it treated to an artful portrait of Japan painted through snapshots of countryside excursions, noodle shops, temples, karaoke bars and Tokyo boardrooms.

McInerney is a brilliant writer and his creative powers are quite possible at their highest in this novel. We highly recommend Ransom, or just about any of his books or essays for that matter. He is such a polished and insightful writer that you simply can’t go wrong with his work, no matter what the subject matter.
Posted by aaron at 2:37 PM