First, come the apologies.  There are at least two reasons that my contributions to TLM have fallen off over the last year: (1) the final editing and publication of my novel, The Last Will and Testament of Lemuel Higgins, and (2) the ill-conceived reading challenge, made way back in February 2011, of the 21 novels that comprise the Aubrey/Maturin Series by Patrick O'Brian.  I call the reading challenge "ill-advised" not because it was unenjoyable or not wholly worthwhile, but because it so completely overtook my reading time and consciousness that it excluded nearly all else.  And yet, here we are, almost one year later, at the beginning of 2012, and I feel truly enriched by both experiences.  Now it's time to share. 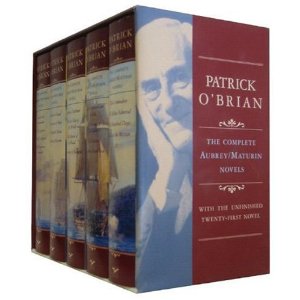 So, let's get to the good stuff.  After making my way through the entire series, I agree wholeheartedly with Richard Snow of the New York Times, who called the Aubrey/Maturin Series "the best historical novels ever written."  I feel like I lived for a time during the Napoleonic Wars, aboard the HMS Surprise, sharing hard tack and grog with midshipmen and members of the lower deck alike, taking prizes from France, Spain, and, occasionally, the United States, and shepherding British intelligence agent, Stephen Maturin, around the world to work against Napoleon's interests and, on more than one occasion, to foment revolution.


If you think that the Aubrey/Maturin Series is simply a follow-on to the eleven novels of the earlier successful Horatio Hornblower series by C.S. Forester, I am here to set you straight.  Though they share a particular period in world history and both revolve around officers in the British Navy, they are worlds apart as works of entertainment and literature.  For all the virtues of the earlier series in terms of historical context and the complexity of Hornblower's character, the earlier books pale in comparison to the characterization of Jack Aubrey and Stephen Maturin, which is masterfully accomplished by O'Brian.

The reader becomes so familiar with the quirks of each character's personality that he or she truly feels among lifelong friends by the end of the series.  I found myself laughing--not chuckling, but laughing long and out loud--at Jack Aubrey's stupid jokes and silly wordplay ("the lesser of two weevils") and genuinely concerned at Stephen Maturin's tendency toward opium addiction. O'Brian develops the characters so completely that the reader feels part of a group among which there are inside jokes and the mood among them is felt rather than understood through the spoken word.  And, perhaps there is no greater compliment to a series of novels than to say that I fell into a period of blue depression when the final words in the last unfinished novel, 21, were read.  This has happened to me before (Evelyn Waugh's Brideshead Revisited comes to mind), but it is a rare occurrence, and I take is as an indicator of enduring quality.  Does this happen to you?

In any case, I hold it as one of the greatest novel to film tragedies of the modern era that the producers of Master and Commander: The Far Side of the World chose to focus on the adventurous aspects of O'Brian's work rather than the more human aspects that are so clearly the focus of the novels.  I'm sure that I'm not the only one.

Overall, the Aubrey/Maturin Series is a fantastic collection, and I am genuinely sorry that there will be no more as O'Brian died in the very act of composing his twenty-first novel, in January 2000.  If you've read one or more of the Aubrey/Maturin Series, please share your thoughts.  And if you haven't, the complete set is listed below.  Start with Desolation Island.  It, like the rest, has TLM's very highest recommendation.

Posted by Patrick (at The Literate Man) at 9:09 AM