The Aubrey/Maturin Series, Books I through V (Reading Challenge Installment 1) 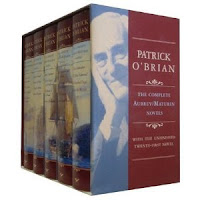 This is the first installment of four in TLM's First Reading Challenge: The Aubrey/Maturin Series by Patrick O'Brian.  We will cover each of the first five novels in the 21-novel series, including Master and Commander,

.  Since simply outlining the action in each book would defeat the purpose of the challenge, I will breakdown each book by most memorable scene, dominant theme, and most interesting character.  Of course, I encourage every one of you to share your thoughts by posting your comments below.
Master and Commander:
Most memorable scene: The taking of the Cacafuego, a Spanish frigate, by Captain Aubrey and his brig, the Sophie.  This is O'Brian's first extended description of a battle at sea, wherein he proves that he is a master.  Jack Aubrey follows Lord Nelson's advice to "Never mind maneuvers, always go at them!"
Dominant theme: Divided loyalties.  Both Stephen Maturin and James Dillon, the Sophie's first lieutenant, have dark histories fighting the British as members of the United Irishmen.  Maturin is both practical and philosophical in his outlook, while Dillon's raw internal struggles lead him to seek his own demise.

Most interesting character: Jack Aubrey.  An unapologetic rogue on land, Aubrey is an experienced sea officer and brilliant naval tactician just coming into his own during the action of M&C.

Most memorable scene: Stephen Maturin leading Jack Aubrey across the French/Spanish border dressed in a bear costume.  The ruse was necessary when Stephen and Jack are caught in France at the time that the Peace of Amiens fails and war resumes with Britain.

Dominant theme: The vagaries of life at sea.  Jack Aubrey spends half of the book running from creditors, who seek to have him thrown in debtors' prison after shifting political alliances rob him of prize money that he is due.  His fortunes revive when Stephen Maturin is able to use his own political influence to involve Jack in the capture of a Spanish convoy carrying treasure.

Most interesting character: Stephen Maturin.  It is in Post Captain that Stephen Maturin's role as a British intelligence agent becomes a prominent part of the series.  Maturin is half Irish and half Catalan, and it is his Catalan heritage that leads him to fight tooth and nail against Napoleon, even overriding his Irish republican distaste for British hegemony.

Most memorable scene: Stephen Maturin operating on himself to remove a bullet lodged between his ribs during a duel.  The duel is precipitated by Stephen's love for Diana Villiers, who has become Richard Canning's mistress in India.

Dominant theme: Affairs of the heart.  Both Jack Aubrey and Stephen Maturin suffer from problems of the heart in HMS Surprise.  Aubrey is cheated out of his share of the captured Spanish treasure and this complicates his pending marriage to Sophie Williams.  Stephen, meanwhile, ineffectually declares his love to Diana Villiers, who will continue to torment him over the course of the series.

Most memorable character: Diana Villiers.  At once fickle and practical, Diana wraps both Aubrey and Maturin around her finger, though it is the learned and philosophical Maturin that receives the most deep and lasting wounds from their relationship.  The reader is never quite sure whether to consider her Maturin's proper mate or a sly female villain of the heart.

Most memorable scene: After Maturin returns to report to Commodore Aubrey the failure of an effort to take Mauritius from the French, Aubrey returns to the scene of the routing and methodically, captured ship by captured ship, turns the tide back in favor of the British, who eventually take the island, though Aubrey is robbed of credit for the enterprise.

Dominant theme: Measuring up.  Lord Clonfert was, at one time, superior in rank and reputation to Jack Aubrey; however, he finds himself under Commodore Aubrey's command at Mauritius.  Clonfert had demonstrated cowardice during an earlier campaign with Aubrey, and it is evident that Aubrey's continued success has him feeling both cowardly and unworthy so that he overcompensates in his command and becomes gravely injured.  Rather than suffer the success of Jack Aubrey at Mauritius, Clonfert commits suicide by removing his bandages.

Most memorable character:  Lord Clonfert, for all the reasons noted above.

Most memorable scene: The sinking of the Waakzaamheid, a 74-gun Dutch ship-of-the-line, in the extreme South Atlantic.  Aubrey's new ship, the Leopard, having been chased nearly to Anterctica by the much larger Waakzaamheid  over the course of many days, the ships exchange fire, and a lucky shot takes down the Dutch ship's foremast, causing her to sink with all hands.

Dominant Theme: Intelligence (and counter-intelligence).  For the first time in the series, the United States takes a prominent role as Aubrey is charged with hauling the American intelligence agent, Luisa Wogan, along with other convicts to Australia.  Maturin makes good use of Ms. Wogan, using her lover to feed her counter-intelligence and helping them both to escape aboard an American whaler while the Leopard is fitting for repairs.

Most memorable character: Stephen Maturin.  O'Brian deals directly and honestly with the evils of addiction by afflicting one of his two main characters with an addiction to laudanum.  His disappointments with Diana Villiers feed the beast that torments him and it is, in part, his deplorable state that leads Jack Aubrey to take to sea once again.

And so concludes the first installment of TLM's four-part series on the Aubrey/Maturin Series by Patrick O'Brian.  Please feel free to share your thoughts, comments, suggestions, complaints, etc.  I'm personally in the middle of book seven, The Surgeon's Mate, so it may be a few weeks before we have another installment.  In the meantime, happy reading.

Posted by Patrick (at The Literate Man) at 2:48 PM