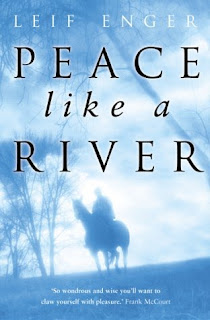 We love it when a book begins well, especially when reading an author for the first time. Whether it’s the first sentence, the first scene or the first chapter, we relish in the immediate realization that the writer can turn a gorgeous phrase, develop an engaging character, or embroil a reader in an original conceit.
Leif Enger’s Peace Like a River engages right from the start. It begins with the intriguing premise that the narrator, Reuben Land, wishes he had good lungs and air to fill them with, and proceeds over the course of its first chapter to tell the brief but remarkable story of Reuben’s first breath. It’s a vignette that establishes critical elements of two of the most important characters in the story – Reuben and his father, Jeremiah. It contains one of my favorite images from the novel – Jeremiah’s right-handed smiting, shortly after Reuben’s birth, of the doctor who is prepared to resign Reuben’s fate to God after his failed attempt to make Reuben breathe. It ends with Reuben’s (really Jeremiah’s) foreshadowing challenge: “We and the world, my children, will always be at war. Retreat is impossible. Arm yourselves.” And it does all this in the equivalent of three pages. Spot on.
Of course, many novels start beautifully only to fail to live up to their initial promise. That’s not the case here, as Peace Like a River delivers. Leif Enger weaves a compelling, introspective and often humorous tale. Reuben, saddled with severe asthma, and his family embark on a journey after his older brother Davy finds himself on the run after dealing with local bullies in their small Minnesota town. Accompanied by his father and his immensely likable little sister, Swede, Reuben pursues his brother and bears witness to the miraculous. It’s a novel where the stakes never seem high, the characters never quite real, but the writing is too enjoyable and the story too wondrous, not unlike that perfect first chapter, to ever want to put it down. This one’s been around for a while, but if you haven’t read it already, check it out.
Back to our strong reaction to the book’s opening episode. We wonder, do you usually pause and reflect on the quality of the first sentence, scene or chapter of a book? Does it color your reading experience for a time, perhaps even for the entirety of the work? Is that fair? Do any novels stand out in your mind that began in mediocrity only to build into magnificence? Or any that failed to live up to a promising beginning?
Posted by Greg@The Literate Man at 2:46 PM